Well kids, the kitchen is mostly finished. Somehow, a cabinet door beneath the sink is MIA. It's actually a 2-door space, and we have one of the doors, so now we need to find someone to match it. I'm telling you, there was some crazy crap going down in this place before we bought it.

So here are a few before shots of the cabinets. The pictures actually don't capture the complete hideousness, so you'll have to trust me on this. Also, make note of the ug-tastic hardware. 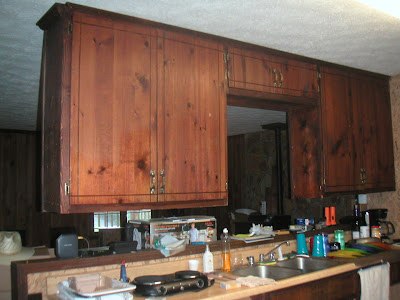 See that hotplate? That is what I used to cook on until the walls and cabinets were finished enough to have appliances delivered...fun times. Notice, too, the paint supplies on the counter and the dishes drying on the side...maddening! 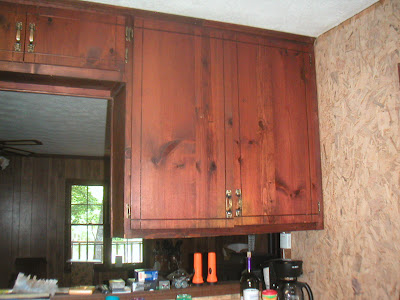 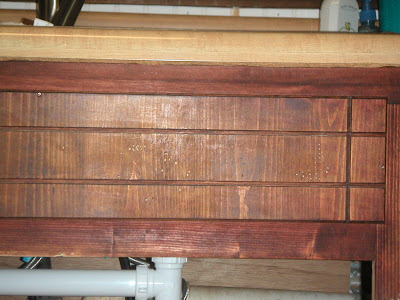 Now, look closely here...see all the little pinholes? This a house-wide problem...someone had issues...just sayin'! 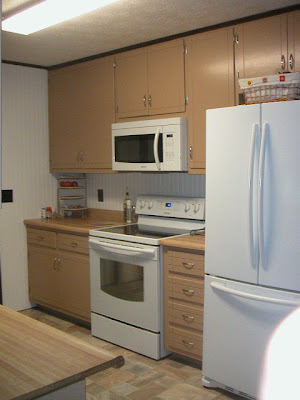 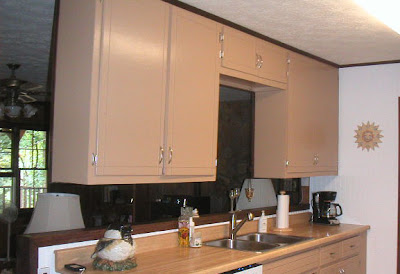 The kitchen has a pass-through into the living room, which I love. Sammy also has discovered the couch on the other side of that wall gives him easy counter top access...which I don't love!


Now, when I visited in May, this is one of the very first things I declared that absolutely had to go.... 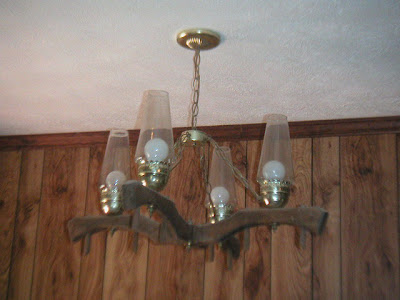 I know, I know...too cheesy for words, right?

Well, that light fixture is now this.... 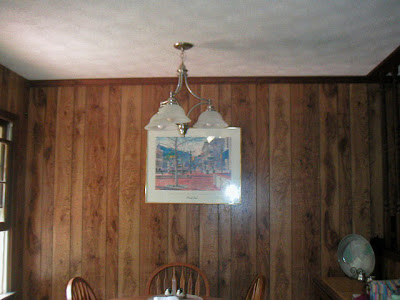 Sorry about that blinding light in the corner...but you gotta admit, this is much better!

Next up on the redo list? The bathrooms! As I told Mr. B a few days ago..."those bathrooms creep me out!" Oh, and the tiny pinholes in the kitchen cabinets? They are NOTHING compared to the pinholes in the walls in the master bath. I just spackled those today. Don't worry, I'll take pictures.

Someday, we'll figure out what we're going to do about the paneling...

The Very Definition of Hell...

Matthew 13:42: "And shall cast them into a furnace of fire: there shall be wailing and gnashing of teeth."

And I’m referring to…

The story is thus:

While her father and I were out running amok on the high seas, Anna was here in Georgia babysitting her pets. Before we left, though, we had budgeted some cash with which to replace her car, the fabulous and much celebrated, Little Red, who was becoming a hazard through no fault of its own (insert grumbling and mumbling about idiots who think they’re mechanics).

The plan was to have her look for cars of interest while here, and upon our return she and I would spend some time checking them out. If we found nothing here, I would begrudgingly drive her back to Missouri where we would continue our search.

We drove all over Northwest Georgia and the experience was, well, rather frightening. The big dealers had nothing in our price range, and the used car dealers were seedy little enterprises stocked with cars which very clearly appeared to either be stolen or repossessed. (Baby seats and other personal items still inside). Oh, there was the cute little yellow VW Beetle with a smiley face painted on the side, but they never returned our phone call.

Sooo, off to Missouri we go. Ten hours later, at 5 pm, the thermometer on my car is reading 105 degrees!

The shopping began in earnest the next day. Let me just point out for the record that every car lot in central Missouri is a vast desert of hot, steamy concrete. The whole time I was there the temperature never dipped below 103 degrees.

Okay, so the adventure begins with a cute little red Chevy 5-speed and a nice salesboy, obviously smitten with my daughter, who tries to give her a lesson on the intricacies of getting and maintaining a good credit rating. All the while I can feel my brain starting to sizzle and I’m thinking, “Dude, I just told you we’re paying cash…you’re cute, but cut the crap.” The entire day, and the next, we drove various sauna-like vehicles, all of which were slightly out of our price range. Dehydration and desperation were in the air.

Then, oh then, we found it! A sweet little Toyota Camry, clean as a whistle and perfectly priced. The dealer, a very grandfatherly type, got the AC going for us and hydrated us while the car was prepped for the big test drive. We drove it down the business loop, then hopped on the interstate to check out how it accelerates and handles at higher speeds. It was sweet! We were smiling and happy and high-fiving each other…then, just after we exited and were heading back to the dealership…

IT. QUIT.
I called the dealership…they were on their way. Then…
IT. STARTED. SMOKING.
The dealer, his partner, and a mechanic arrived. Then…
IT. CAUGHT. FIRE!
Then the mechanic risked life and limb by yanking out the washer fluid container and dousing the flames.
There was a big scorch mark on the hood.
They apologized all over themselves.
We forgave them.
Then we took a break.

Now, being the hearty souls we are, and on a whim (and frankly, we were now just a little gun shy when it came to used car lots), we decided to cruise the local Chevy dealer lot. Of course, you absolutely never cruise a car lot and not have a salesperson magically materialize at your window. Actually, he thought he just might have what we’re looking for. We went inside, he brought us water, the other salesboy there flirted with Anna, we told them story of the flaming Camry, and, being properly mortified, they brought us more water.
Dead end…the perfect car had just been sold.

Okay, now we’re four days into it, it’s Saturday, July 30th and I absolutely have to get back to Georgia, because my Missouri plates are about to expire. On a tip from my mother we drive 30 miles to visit her dealer, who assures her that he has plenty of things in my price range, only to be shown a $12,000 vehicle, and then be told, “No, we have nothing in your price range”. My head is going to explode.

On the way back the conversation turned to VW’s, and I told Anna to get on the I-phone and find a dealer. She says, “Head Motor Company has a Jetta for $3,950”. I said, “Let’s go.” We surprised the salesman by specifically requesting that car, because they had just put it out on the lot that morning. We drove it, we inspected it, I talked him down to $3,500, we bought it.

Go get a 3-4 lb. pork butt
1 small can of chipotle peppers in adobo sauce
(yes, your grocery store does have it...it's in the Hispanic food section in a quiet, unassuming little can)
Half an onion
Brown Sugar
Penzey's Arizona Dreaming spice blend
(If you don't have Penzey's that makes me very sad, but you can fake it w/ some ground chili pepper, onion and garlic powder, lemon peel, paprika, and cocoa)

Plop that roast into your crockpot, dump the can of peppers on top and around the sides, slice up the onion and toss that in there, then sprinkle the top with brown sugar and the spice blend. Let it cook on low all day.

Now, take the roast out, let it cool a bit, then grab a couple of forks and shred that puppy up.
Put that in a deep-sided skillet, sprinkle the top w/ more brown sugar, add about 1/2 cup of the liquid from the crockpot and some of the sliced onion, and, this is important, so listen up...
DO NOT ADD MORE THAN ONE OF THOSE PEPPERS TO THE SHREDDED MEAT...OR YOU WILL DIE.

So, here's where it gets kinky...
take a whole fresh peach, peel it, then dice it up and toss that in the pan with everything else.
(It helps if it's a Georgia peach which you have just purchased straight from the farmer's truck, but we can't all be that lucky)

Put the lid on the pan and let it simmer for awhile.
Then remove the lid and let the liquid boil off.

You're welcome!
Love ya madly!