Twenty years ago a tiny little girl decided that she was sick and tired of kickin' back in the womb, and
made her world debut three weeks ahead of schedule.

She's been setting her own timeline ever since...


your time has only just begun...
savor the journey.

Love you the most,

Mom and Dad
Posted by Lisa at 3:00 AM 2 comments: Links to this post

The Great Toadpole Relocation of 2012

It would appear that the resident toads of Bruce's Hermitage were very prolific this spring; finding the calm waters of  Lower Hermitage Pond an ideal nursery for their burgeoning brood. The pond was literally teeming with tiny toadpoles...thousands, actually. 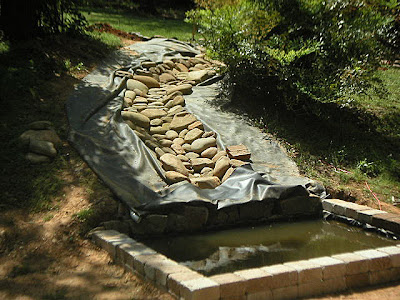 Meanwhile, as Mother Nature provided us (or rather Mr. B) with lots of prime, pond building weather, the inevitable was bound to happen. That is, someday, in the very near future, the pump in Lower Hermitage Pond would have to be turned on, which in turn would flood Upper Hermitage Pond, thereby causing Hermitage Mountain Stream to flow between the two. It is a carefully orchestrated engineering feat, which must happen at just the right time in the pond-building process to ensure the success of entire endeavor.

Two weeks ago Mr. B had a little chat with the toadpoles of Lower Hermitage pond, informing them that they had one week in which to lose their tails, grow their legs, and be on their merry way. He explained that the Pump of Death, designed to move 6,000 gallons of water per minute, essentially mulched anything and everything that got sucked into it. They were unfazed.

Meanwhile, we received several inches of rain one afternoon, and there was a great flood. Many toadpoles were washed to their deaths in the mud flats. And I'm pretty sure that my husband gave the toadpoles another week's reprieve, because he caught me rescuing those that were fortunate enough to have been washed into small pools formed by the flood.

Last weekend was a perfect weekend...sunny, 70's, light breeze. Patience had reached an end, and there was no indication that those little devils were going anywhere anytime soon. So, Mr. Mush came up with a plan that would make everyone happy.

He set up a nursery pond outside of Lower Hermitage pond, we would transfer as many of the little guys as we could catch to their very own private pond , and the pump would get turned on. Everyone wins. 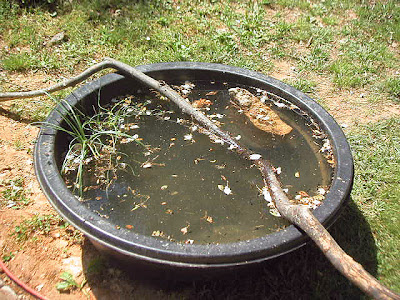 (All those little black spots are toadpoles)
So Sunday morning, armed with the pond skimming net, I embarked on Operation Toadpole Relocation. Now, you can talk yourself silly trying to 'splain to these rascals that they were going to a much happier place, a place devoid of sucking, mulching pumps, with plenty of moss to eat, plants and rocks to hide amongst, and their very own bridge to freedom once they finally decide to grow those little toady legs. But they saw it more as an impromptu game of hide and seek. Fortunately, there really weren't that many places they could hide.

Finally, the scooping was done, the pump was turned on and we held our breaths as we witnessed the magic. As the water came rushing down the stream, I looked up the hill and got the TD sign from Mr. B. Success! 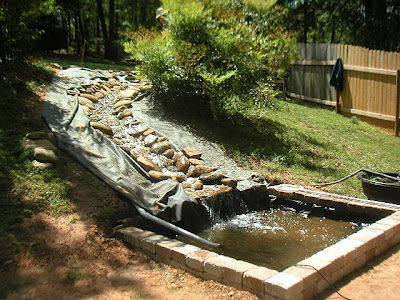 Interestingly, while watching the water flow into the upper pond, we were awestruck to see several toadpoles had survived the Pump of Death. Then, equally dismayed to watch as they were swept downstream on a rocky bumpy ride back from whence they came. It would also appear that two fish survived the falls. The rest of the toadpoles that didn't get relocated or sucked to their deaths? They are happily feasting on the shallow edge of Lower Hermitage Pond. 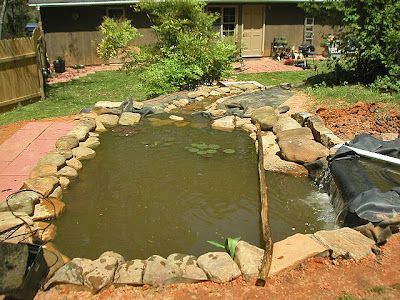 Now comes the fun part...putting on the finishing touches!
This could take awhile.
So, I ask you...
how much do you love a man who cares enough about a bunch of baby toads to provide them with their own nursery?
I know how much I do...
Posted by Lisa at 5:26 PM 3 comments: Links to this post