I have been pondering this post for a long time, because, quite simply, I have been having a difficult time finding the correct words to convey how absolutely stunningly wonderful my birthday was for me. Even the words "stunningly wonderful" seem to be a gross understatement when compared to how I truly felt.

My actual birthday was spent as relatively quietly as my family would allow. I fielded calls and email from family and friends, worked at the bird store, and had a lovely dinner with my older sister that evening. The real excitement, though, was scheduled to begin the next day (Saturday).

As it turns out, that Saturday was the final bird walk for the store. My brother-in-law, Jeff (married to my younger sister), leads those bird walks. We had big plans for Jeff.  Now, it should be known that my older sister and Jeff have a long history of "acting up" when they are together. The plan was to surprise him on the bird walk with my sister dressed in a bluebird costume. The previous night she and I had a riotous time making signs for the blue bird to hold up for him to read through his binoculars, which included fun bluebird facts filled w/ various editorial comments. 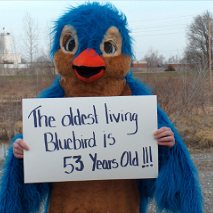 After a few setbacks in that department, including having the bird walkers drive right past us, and our having to catch them (my fault, I'm a bozo), we managed to pull it off, and everyone was highly amused. Shenanigans complete.

Then Jeff informed me that there was a surprise for me in his car. As I walked toward the car holding the blue bird's signs, the side door of his van opened and a hooded person emerged. Turning slowly toward me I recognized the blue eyes and beautiful smile of the love of my life! (Who, I should add, I haven't seen since Thanksgiving.)

What happened after that seemed to occur in slow motion. My heart leaped into my throat and I somehow propelled myself into his arms. There were tears, and hugs, and, of course, kisses. I don't think many of the bird walkers managed to stay dry-eyed either. Later in the day, I wondered what I did with the afore-mentioned signs and was grudgingly informed by my sister that I tossed them on the ground.

Not one person knew he was going to be here. He drove 11 hours and walked into the store as the "walkers" were gathering and surprised them. Later, at a multi-birthday gathering at my mother's home, the rest of the family was caught off guard when he walked in the door. Our daughter, who arrived later, had a similar reaction to mine when he came around the corner.

A funny side-note to this story is that he was planning to come into the store from the bird walk dressed in an eagle costume to surprise me. Although we thwarted that plan, it still worked out wonderfully.

He had to leave bright and early the next day.

My husband drove a total of 22 hours to spend one day with me. It meant, and means, more to me than I can possibly convey.

Thank you, Honey, for the best birthday gift EVER!
Posted by Lisa at 11:58 AM

That is such a lovely story! Glad you had such a wonderful birthday! :-)

You couldn't make that stuff up - you have to marry it! Love you both!