This may very well be one of the most controversial things you'll ever see posted here...

but some things need to be said.

And David Walker, Jr., a partner in the law firm at which I am employed, said it very well in an office-wide email this morning:

"You may have noticed the banner hanging on our facade this morning, which states:  “WE BUILT IT”.  You may have seen it in other businesses as well.

By way of explanation, the message is our rejection of the President’s allegations that somehow Government is responsible for individual effort and success or failure.  In particular, these are his remarks from a speech in Roanoke, Virginia:
'Look, if you’ve been successful, you didn’t get there on your own.  You didn’t get there on your own.  I’m always struck by people who think, well, it must be because I was just so smart.  There are a lot of smart people out there.  It must be because I worked harder than everybody else.  Let me tell you something -- there are a whole bunch of hardworking people out there.
If you were successful, somebody along the line gave you some help.  There was a great teacher somewhere in your life.  Somebody helped to create this unbelievable American system that we have that allowed you to thrive.  Somebody invested in roads and bridges.  If you’ve got a business -- you didn’t build that.  Somebody else made that happen.
We reject Mr. Obama’s accusations.  We do not believe anybody other than the people who invest in this firm, work for this firm, and make the daily decisions that guide this firm are the people who built this firm.  We do not owe our success or failure to any Administration – it rests solely upon the effort, intellect, and ingenuity of the people who own and work for this business.  And we believe that is the case for almost any small business, including many small business owners who are our clients.

Furthermore, the notion that government or some other state-owned entity built roads, schools, bridges, and other infrastructure on its own is in and of itself ludicrous.  Roads, schools, bridges and post offices – while in existence before our firm – were nonetheless ALSO built by other businesses and people who paid taxes.  Roads and bridges don’t just appear out of nowhere as a result of the largesse of government.  Roads and bridges are themselves constructed by businesses and taxpayers and paid for by other businesses/taxpayers who preceded us.

It is for these reasons that we reject Mr. Obama’s premise and assert that We Built This business." 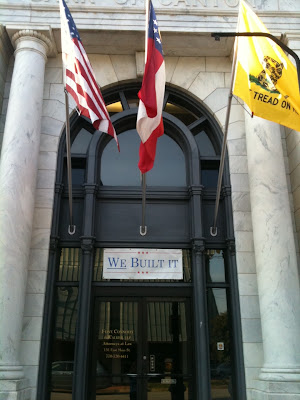