My younger sister is bossy. She tells me to start a blog. She tells me I need to post. She tells me what I need to post about. She thinks I am neglecting the third and final fur baby in our household.
Sorry, kiddo, the problem is not neglect, but lack of a decent photo. Your brother-in-law did come through, though, by emailing me several hundred pictures to wade through. Just don’t make fun of my photography skills…there are limits to my talents!
Hello, Dolly!
(aka WCC, so named by none other than the aforementioned bossy sister) 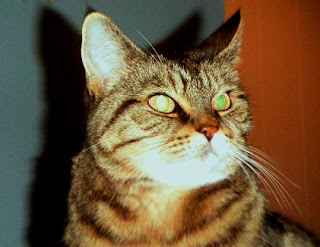 This little girl was discovered on our wood pile one cold, rainy February morning in southern Oregon. (Actually, our female cat discovered her first and was none too thrilled with her presence.) She was a tiny little thing with a lame paw and a grateful purr. She was hungry and wet and oh so sweet. Our daughter, who was 6 years old at the time, fell instantly in love with her. So did I, but I had no intention of keeping her. I honestly believed that there was a sweet child somewhere in our neighborhood missing their kitty cat. I put up signs, checked with the kids and parents at school, animal shelters, the vet…no leads.
She remained an outside kitty until it became obvious that the “special operation” was necessary. I certainly couldn’t allow her to recuperate outside, could I?
The rest is history.
Miss Dolly charms her way through life with her cherubic face, fluffy coat, and a purr that can be heard across the room.
Dolly purrs.
She purrs when you talk to her.
She purrs when you feed her.
She purrs when you simply touch her on the head.
Dolly is all cat.
Dolly has short legs.
Dolly has a bulls-eye on her belly.
Dolly is an extraordinary huntress. Birds and mice fear her, but she specializes in moles.
Dolly loves to warm her belly in the sun.
Dolly loves her girl; and her girl loves her. 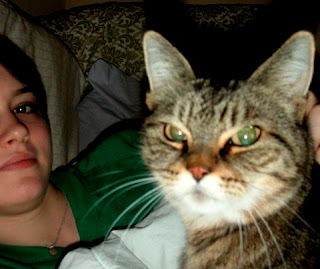 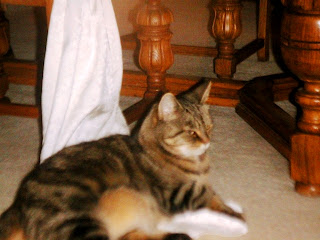 Dolly is a living, breathing, purring stuffed animal…squishy and warm and snuggly.
WCC?
World’s Cutest Cat.
(my pictures don't do her justice)
Posted by Lisa at 2:52 PM

there is a lot to be said for being the pretty girl that can kick your butt.

And exactly when did you ever start listening to me?