“I took off for a weekend last month, just to try and recall the whole year...”
Well, actually, it was a week.
And while we’re making confessions…it wasn’t just me.
And it’s quite possible that “recalling” the whole year was not exactly part of the game plan.
However, there were 8 of us who really, really needed a change in attitude.
The whole motley crew consisted of my husband, his mother, brother, two sisters and their spouses (minus one). Incidentally, all of whom I love and respect as dearly as my own flesh and blood.
(And we all know how I feel about them.) 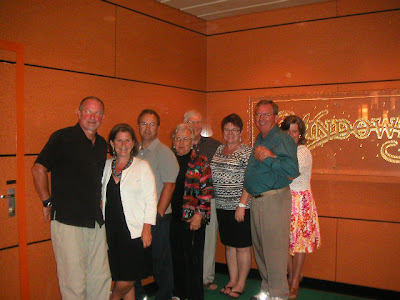 No, I am not trying to hide...when random strangers take your photo you never know what you're going to get.


On a muggy Saturday afternoon we converged on New Orleans at amazingly close to the same time, considering that we were all coming from different parts of the country. We spent that afternoon, evening and part of the next morning exploring Bourbon Street and the French Quarter. 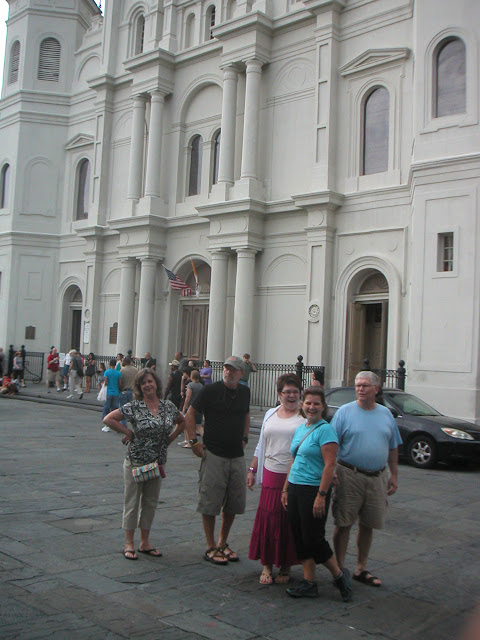 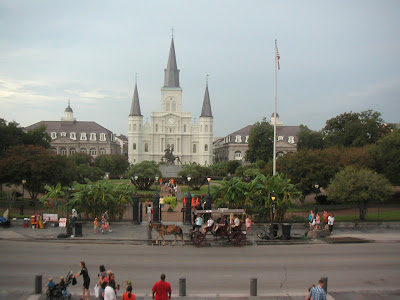 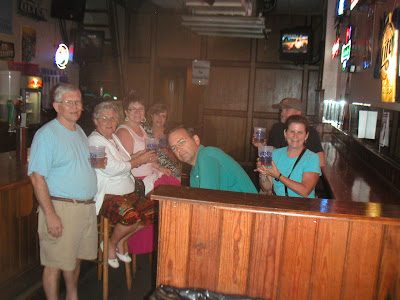 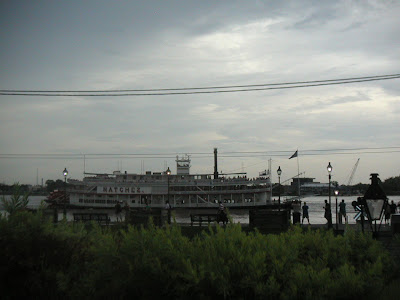 On Sunday we boarded one very big-assed ship docked on the Mississippi River (no, not that one....a much, much, much bigger one) and cruised around the Caribbean for seven days with stops in Costa Maya, Hondura’s Roatan Island, Belize and Cozumel. There were plenty of sunburns, and a great deal of alcohol was consumed (both sanctioned and, ahem, contraband).
In short, a great time was had by all.
Although, there were those innocent bystanders who probably thought we had a little too much fun.
But their opinions matter not.
On day one, before we even set sail, my brother-in-law discovered the Bier Garten (good boy), and it soon became apparent that this is where most of our on-board time would be spent. The advantages of the Bier Garten were many:
We quickly staked out our corner of the Bier Garten, rearranging lounge chairs around a few tables, and warning anyone who came to occupy the chairs closest to us that they did so at their own risk. Most of those people were cool, and we enjoyed their company. Others were, shall we say, not. They usually didn’t come back, either.  Interestingly, that spot was always available for us whenever we decided to congregate there (which was often).
Anyway…here are a few snippets and observations (not all of which are my own) acquired during the trip:
The insanity of Bourbon Street is contagious. 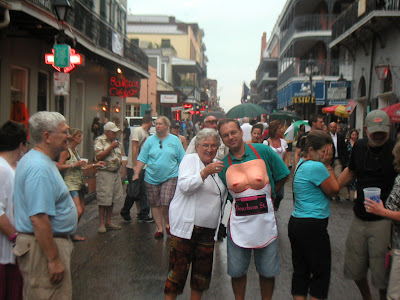 Check out my sister-in-law trying to disassociate herself from her own mother and brother! Tsk, tsk!

Musicians south of the border define “harmony” differently than the rest of us.
Somewhere in the world Neil Diamond’s ears are bleeding.
Before you dip it into your amaretto sour, it’s always wise to make sure the pineapple on that skewer the waitress just handed you is not, in fact, cleverly disguised cheese.
For sanity’s sake, one must make peace with the fact that one will, quite simply, spend an entire week with bad hair. 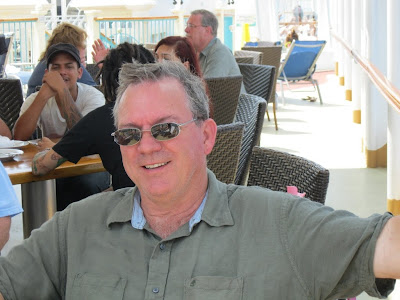 Morning showers are pointless.
Hats are your friend. 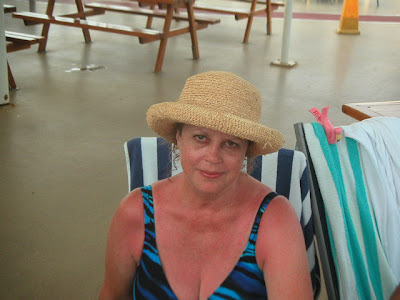 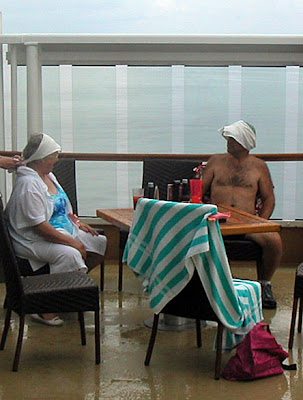 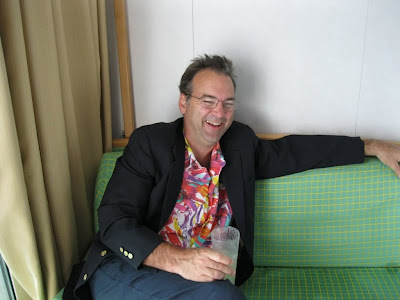 So is chair dancing.
There are great number of people in the world who are expertly skilled in working a buffet.
There are in-laws and then there are outlaws (a moniker I proudly share with one of my most favorite people in the entire world.) 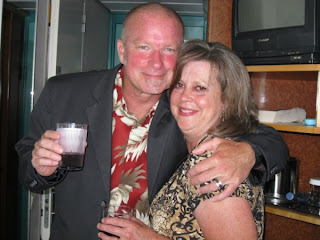 Outlaws and damn proud of it!


Sometimes fate hands you an elevator filled with exactly the right group of personalities to make it one of the funniest experiences of your life.
The water the wait staff just spritzed on you under the guise of cooling you off is really disinfectant.
You will only get towel animals from your steward if you don’t immediately gain the reputation as a rebel and malcontent. 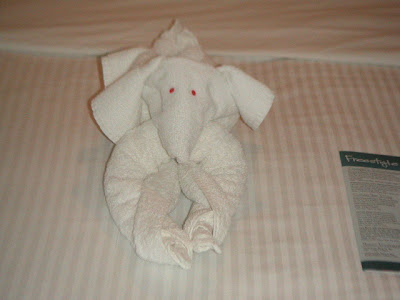 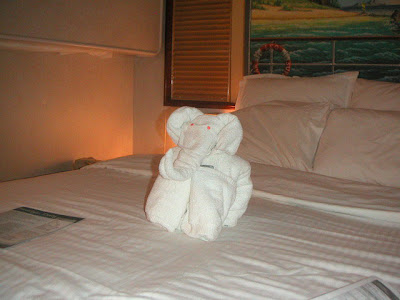 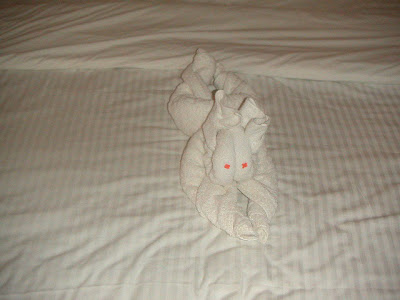 No one knows for sure


If you decide to reveal to the entire group that your husband’s Sean Connery impression always makes you laugh, then you must be prepared for everyone else's Sean Connery impression.
IT. IS. ALWAYS. FUNNY.
Wise men ALWAYS give their wives of 27 years a heads-up BEFORE announcing to a large group of snorkelers, which include children unschooled in snorkeling etiquette, that he and said wife have just spotted a manatee, lest said wife be swamped by those 30 other snorkelers (insert Lisa Look).
The most commonly heard Jimmy Buffett song, both on the ship and off, was “Cheeseburger in Paradise”…HUH?
It is possible, with the proper application of ice, to make those 4 drinks ordered for you at 10 am last the entire day.
Careful drink planning can turn a 7 day cruise into a 14 day cruise. 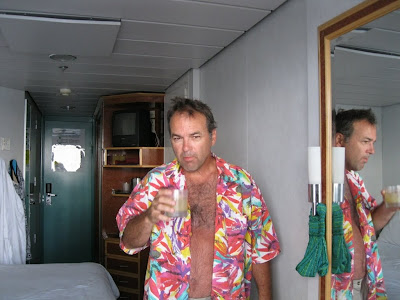 
We met some wonderful people…
Newlyweds Larry and Angela from Arkansas (along w/ their beautiful 16 year old daughter, Demi), the three of whom graced us with the most lovely smiles, and who were brave enough to participate in the pub crawl not just once, but twice. (Not to worry, Demi found better things to do w/ her time.) 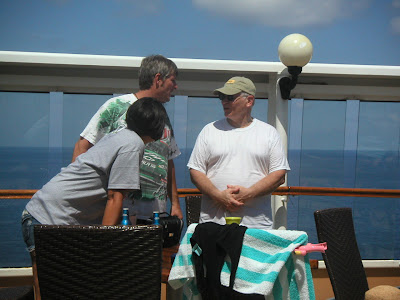 Angela, Larry, and Larry
(all from Arkansas)


Newlywed teachers Matt and Heather from Wisconsin with whom Bruce and I shared a bucket of beer, some rum punch, and chair dancing. By the way, Heather is also a shuffleboard shark.
And we must not forget Trisha and her clan from Texas…our Bier Garten buddies.
This trip was just what the doctor ordered. 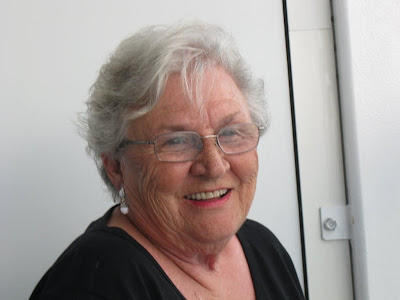 It is all about the story.. Thank goodness you could remember..
Like I said, "The best 14 days I spent was a 1 week cruise"
Love you,
Bob