It's not for the weak of heart or spirit....
especially, when the paneling in question is of the cheap, faux wood variety...
but it sure makes a big difference.
I chose to paint it, rather than replace it with drywall, because, well...it would cost a small fortune, and I don't even want to think about the mess and destruction that would entail...been there, not interested in re-visiting!
And, you know what?
I think the "plank wall" look is rather interesting.
I'm strange like that. 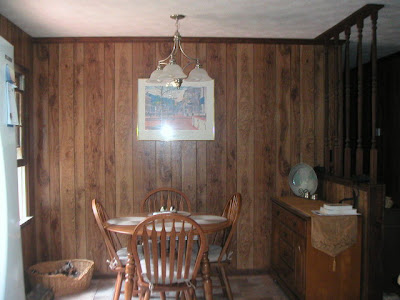 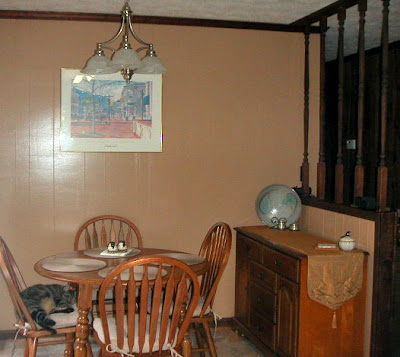 The color on this wall matches the kitchen cabinets in order to tie the kitchen and dining area together. Genius...I know.

I thought I'd snapped a before shot of this wall, but apparently I was mistaken. So, you'll have to use your imagination. 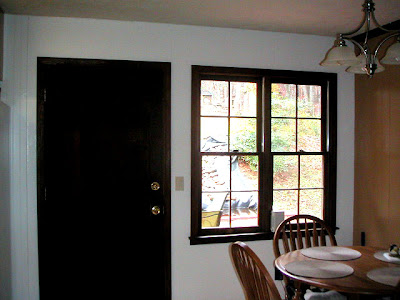 I chose white for this wall, because the kitchen's beadboard stopped to the left of the door, and I wanted to keep the color on that wall consistent. Again...tying the whole thing together.

I'm looking at this picture, thinking that the wall looks really stark compared to the other one...but, and you have to trust me on this, it looks much better in real life and viewed as a whole. Really.

So, there you have it.
Are you getting sick of this before and after nonsense yet?
Posted by Lisa at 9:54 AM

I think it looks very nice - and nope I enjoy the before and after. Shows just how much work goes into something to make it turn out so well!

Looks not only great, but professional, and no, I am not tired of the befores and afters... good job! Grace

I love the texture the paneling creates...we have painted paneling before :) Keep the pictures coming girl!!